0.75x
1x
1.25x
1.5x
2x
0:00
00:10:47
Apple PodcastsGoogle PodcastsPlayer EmbedShare Leave a ReviewListen in a New WindowDownloadSoundCloudStitcherSubscribe on AndroidSubscribe via RSSSpotify
Looking For Some Fire In Your Inbox?
Sign Up For Awesome Updates
Powered by the Simple Podcast Press Player

It may have been buried under disappointments. It may have been shrouded in fears and insecurities. Maybe your unique contribution is clouded by excuses and reasons you think no one would listen.

But it has never been lost. You are not looking for something outside of yourself.

He has planted His will and ways in your heart and you have been given the royal privilege of stewarding that gift.

Whatever talent you have, don’t be scared to bring it to the table.

I said it earlier, and I’ll say it again.

00:00:42.490]
And his voice was lost for like literally months and months and months. This guy, his name was Michael Black, and he just simply could not speak. And then all of a sudden, like as if, like some some hands had been waved over him, his voice just came back just like that. But but, you know, Michael Black’s experience in The Natural is not really very instructive for us, although I think I think a lot of creatives kind of act a bit like that.

00:01:17.070]
They’re waiting for some kind of magical moment in which their voice will suddenly appear, that they will suddenly discover their voice and their place in the world and begin to resonate with the people that they’re called to engage with and reach and help. But the truth is, most of the time that doesn’t happen. I mean, I’m a big believer in miracles, so I believe that anything is possible. You know, sometimes there are such kind of incredible shifts in the spirit that like one day is one day is black, the next day is white.

00:01:59.880]
But often times the progress that we make, the the breakthroughs that we experience as something that happens gradually, you know, it’s actually we grow into them. We become the person that God has already made us to be on the inside. And although, as the scriptures say, all things have been made, new old things have passed away. Sometimes the outworking of that takes some time, takes some effort, takes some energy, takes some application. And we actually gradually become the person that we know that we are on the inside and we become more adept at actually communicating from the heart rather than from the surface.

00:02:53.670]
But, you know, I found that really the key to finding your voice is it’s not something that you’re looking for outside of yourself. It’s something that’s already residing within you. And quite honestly, the way that we find our voice is to just simply use it by reason of use. You’ll begin to hear your unique awesome. You’ll begin to shape that special that lives on the inside of you. And it will your your step into greater clarity as you step out.

00:03:39.000]
It’s like rather than waiting for perfection, we just begin to kind of put ourselves out there. There’s a saying, isn’t there, that your message is often found in your mess. Like, quite a number of years ago, Larna lost a gold bracelet and she’s thinking, man, where’s this gone? It was it was a beautiful piece of jewellery and she really couldn’t figure out what had happened to it. And then the Holy Spirit highlighted something to her and she she went out and we had like a garden bench where we put kind of all of the leaves and the rubbish and the branches and the dirt.

00:04:20.820]
And she found it in that that being of kind of gnarly, dried up old roots and branches and in the dirt she dug through and she found the gold. She found this gold bracelet. And, you know, I think that’s probably a better picture of what it’s like sometimes trying to find our voice, that we actually have to kind of dig through some things before we discover, like how what we actually have to bring. You know, sometimes people don’t want to dig through the dirt to get to the gold.

00:05:02.580]
Sometimes they don’t. We don’t want and I’m like, I can I can completely relate to this, we don’t want to put ourself out there because we just feel we’re not ready. We don’t want to put ourselves out there because somehow we feel as though, you know, whatever it is we’ve got to bring isn’t fully cooked. But the truth is, it’s actually by putting yourself out there, it’s by kind of if you’re a writer, you’re going to find your voice by writing.

00:05:32.310]
If you’re a singer, you’re going to find your voice by singing. If you if whatever kind of discipline or gift that you’re operating in, it’s going to be honed. It’s going to be the uncovering of the amazing the uncovering of the awesome is going to happen as you exercise that gift. And so I just encourage you today, Jim, and don’t be afraid to step out. Don’t wait until everything is clear. Don’t pause until everything is perfect.

00:06:04.350]
Your voice really is waiting for you and the world is waiting for your voice. And, you know, just just begin to dig through the scriptures, tell us that our sufficiency is not of ourselves, but it’s of God. It’s not like we we don’t have to be looking outside of ourselves to find our voice. You know, you don’t you don’t have to have someone else kind of find it for you and point it out for you. You’re going to find it as you begin to communicate and express your heart in whatever way works for you, in whatever way is most fitting for your personality, whether that’s writing, whether that’s blogging, singing, whether it’s through books, whether it’s through painting.

00:06:54.000]
As you exercise your gift, there’s going to come greater clarity. You know, your voice, as I say, is not something that’s outside of you. It’s something that is in you already. God has planted something within your heart that he wants to bring to the table to help, to bless, to build, to engage with other people. Don’t be afraid to put it out there. You know, sometimes we’re afraid because we think we might be criticised.

00:07:26.730]
It may be that may happen to you. I mean, we’ve got to be aware of that. Sometimes you may be afraid to put yourself out there for for another reason. This sometimes is even worse than criticism is because you’re going to be like singing to an audience of crickets. That’s a difficult one, you know, but we all we all start without an audience. We all start without a crowd. We all begin to step out. And in many ways, that’s actually quite a kind of merciful thing, because it allows us in that secret place, in that just small, maybe just a small number of is a small number of eyes.

00:08:12.180]
It allows us to explore without fear. It allows us to engage experimentally. It allows us to step into our gift without being too concerned that everything has to be exactly perfect. And as we do that, whether it’s an audience of one or one hundred or one thousand, it really doesn’t matter because it’s actually just part of the journey towards discovering who you are and discovering and clarifying the message that you’ve got to bring. So I just encourage you today, Jim and as a Christian creative step out and begin to look for ways to, like I say, not not like look for your voice, explore the things that God has placed in your heart.

00:09:52.080]
Don’t wait to do that thing. Begin to do it now in your imperfection, in your insecurity, with whatever fears may be kind of challenge. Your hard push through those and just put your worth out in the world, keep doing that, keep doing that, keep doing that. And as you do, your message and your voice will become clearer and clearer and clearer. Well, thanks for listening, hopefully. It’s been an encouragement to you today, if you want to connect any further, you can do so through my website at Davidleemartin.com. 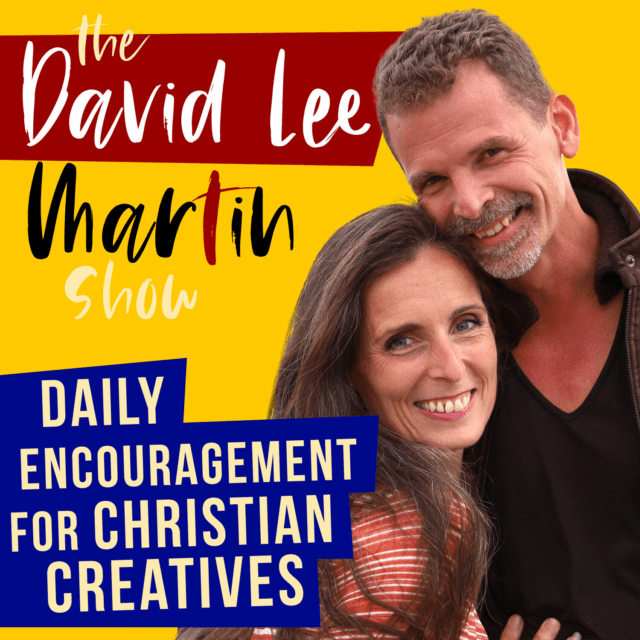