0.75x
1x
1.25x
1.5x
2x
0:00
00:13:10
Apple PodcastsGoogle PodcastsPlayer EmbedShare Leave a ReviewListen in a New WindowDownloadSoundCloudStitcherSubscribe on AndroidSubscribe via RSSSpotify
Looking For Some Fire In Your Inbox?
Sign Up For Awesome Updates
Powered by the Simple Podcast Press Player

Has there ever been a time when authentic expressions from the body of Christ were more needed? You are uniquely created by God to be YOU! Not what the world thinks you should be, not what society says, but the genuine uncompromised outshining of Christ!

00:00:03.290]
What I’m sharing today was inspired by a sermon that Larna, my amazing wife. And there is nothing better on this planet than having an amazing wife.

00:00:44.330]
Prayed on and even written about in the past on a number of occasions from the Book of Zechariah. It really does kind of open up some.

00:00:57.570]
Interesting thoughts about the creative life and living a creative Christ filled calling. Now creativity, unencumbered by man’s opinions, is one of the strategies that Heaven is using to raise resistance to the ground. Absolutely burn it to the ground and bring glory to the Creator. It’s so easy for our creativity to be squashed and quenched by our fear of the opinion of other people. But I believe God is raising up a company of craftsmen, artisans, artists, musicians, writers, painters who will not be fearful to take risks, who will not be afraid to step up and step out and let their voice and let their art speak on their behalf without being so concerned about what others will think or say.

00:02:06.810]
I don’t think there’s ever been a time when authentic expressions from the body of Christ were more needed. You are uniquely created by God to be you. And yet the world tries to get us to be moulded and conformed to its idea of how we should be, how we should talk, what we should look like when we say that God has created uniquely to be you. We’re not talking about what the world thinks you should be, or even the Church thinks you should be. Not what society says, but the genuine, uncompromised outshining of Christ alive in you making himself known the Book of Zechariah.

00:02:59.970]
He saw a day in which God’s people would be scattered and their heads hung low. I think we live in a similar day today. And he writes, Then I raised up my eyes and looked and there were four horns. Horns speak of authorities in the realm of the spirit. You’re talking about principalities powers, demonic influence and schemes at work in the Earth. And I said to the angel who talked with me, what are these? And he answered, These are the horns that have scattered Judah, Israel and Jerusalem.

00:03:38.430]
And I said, what are these coming to do? So he said, These are the horns that scattered Judah so no one could lift up his head, the schemes of the enemy, to scatter the people of God, to splinter the house of the Lord and to bow our heads in shame are so real and so powerful and so potent that we have to be very, very aggressively intentional not to bow to their influence, not to take them on board and allow the heavy yoke of slavery to once again come on our shoulder.

00:04:23.070]
You are not a slave to fear. You are a glorious outshining of Christ in the Earth on the planet. You are a scary person to the devil. God’s remedy is so eye opening because this scripture in Zechariah continues. Then the Lord showed me four Kraftsmen and Zechariah. He asks again, what are these? What’s this all about? And God spoke of their warring purpose. Zechariah one eight through 21. If you want to read it in your own Bible, the craftsmen are coming to terrify them, to terrify these demonic spiritual authorities that are seeking to scatter and to depress the people of God.

00:05:16.350]
He says he’s sending craftsmen out to terrify them, to cast out the horns of the nations that lifted up their Horn against the land of Judah. To scatter it. Now part of my own creative journey into fiction publishing was a response to the slew of dark, supernatural themes that seemed to be fill in the shelves of our children’s stores now glamorising witchcraft, romanticising shape shifting desensitising impressionable minds to the reality of the spirit realm and its dangers. Making out that it’s like fun, romantic, entertaining, heroic.

00:05:58.110]
What a lie. False gods and erroneous worldviews sowing confusion and scattering the people of God in the name of entertainment. Dear friends, my brothers and my sisters. The world of the media is such a powerful tool, both in the hands of the enemy, but more so in the hands of God’s people. O Lord, in the name of Jesus, send your craftsmen into the fray. Let them come and terrify. That’s my prayer. That’s my desire. Raise up the artists raise up the artisans, raise up the writers and the poets and the painters raise up the dancers who will dance on injustice.

00:06:53.110]
The Bible speaks of two ruling spirits at work in the Earth spoken of in one John Four verse six. It could not get simpler than this. He speaks of the spirit of truth and the spirit of error. Oh, dear Jesus. Error is very much on display right now. But God is raising up an army of artisans, creative craftsmen to terrify the enemy. Stories to be told, songs to be sung, visions that carry God’s anointing on a canvas, prayers that are painted fashions that are fashioned in heaven’s courts.

00:07:42.130]
And then sown here on Earth beats that capture the heart of Jesus games that glorify righteousness and ride rough shod over Satan’s schemes. We live in days where the Church and when the Church needs to be distinct, melding into the wallpaper so no one gets offended has worn way thin the time, I believe, has come to terrify. And I mean that in the most Holy and the most wonderful and the most loving and powerful anointed way possible. Terrify the devil with our songs, slice him with our stories, shame him with our sanctified selfexpression.

00:08:31.390]
Let the world know that the voice of the Church, the Church of the living God will not be silenced. What has God placed in your heart has shame or splintered emotion held you back from stepping out? Here’s a great question. What would a 100% you authentic, genuine article look like if you were to step out onto the world stage? And how can you begin to live with that kind of fearless abandon? What would you do if failure was not an option? Is it possible that there is a lion living on the inside of you ready to roar in a Christianity?

00:09:26.530]
The kind of Christianity that we have embraced and that we live? The Christ that we know is not some kitten to be petted and pacified. It’s the real and Rawsome reality that the devil tries to mimic this grand that we call Christ the lion of Judah. This warring, wonderful, majestic King is mimicked by Satan and we’re told that Satan, like a lion, prowls around looking for those he can devour. But God, my friend, is releasing the Lions of Judah, his high praising artful priests to shut the Devil’s mouth and declare his demise.

00:11:16.670]
They may push for preeminence but here in the body of Christ, we carry a new Renaissance and we don’t need to parade. Our wisdom and genius is not of ourselves and we know it pulling marbles from the world above we strike hard at the heart of the enemy reaching far behind his lines. The arts are designed to touch the heart to bypass reason and strike deep our wisdom and our genius is not of ourselves words we write break through the hardest hearts tunes we sing shower Grace on the hero and usher in the presence poems that we pen paintings that we create strike like sharpened sides reaping harvests of humanity for the King and his Kingdom.

00:12:42.070]
Well, thanks for listening. Hopefully, it’s been an encouragement to you today. If you want to connect any further, you can do so through my website, davidleemartin.com. 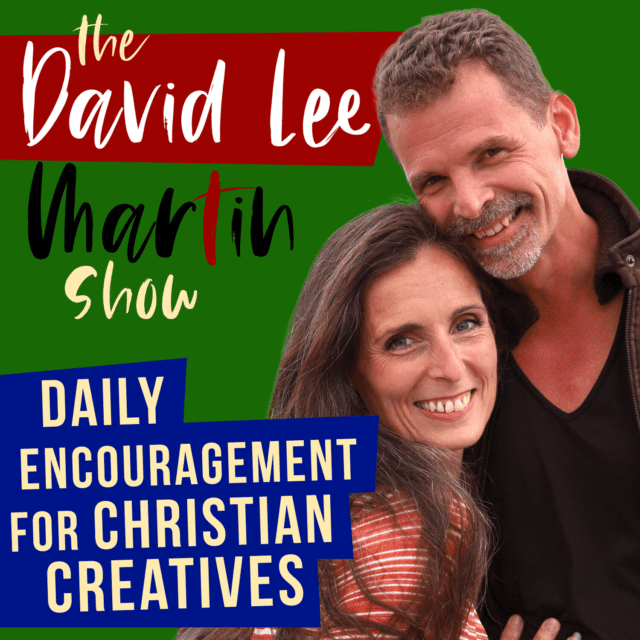