In fact, it may be weird to pray nowadays, period.

Most folks like to think they can do life themselves. No help. No fallback. No crutch.

I’m helplessly and happily aware that without Jesus I’m up a creek without a paddle. In fact, not just a paddle, a boat, a motor, a direction, a scrap of toilet paper, or even a hope!

Atheists passionately practice their non-belief with religious zeal nowadays. Ironic how “not believing” has become so in vogue. It’s the new thing to believe. Apparently.

The high-priests of nothing-there push their belief in not believing with a devotion that shames the luke-warmness of many churchgoers.

The worship of self is the altar of choice for a generation.

All the while, there’s some weird folk praying.

We believe in a God who invades time with grace.

We have experienced His (yes, His, a Person!) power in our lives.

He is not some religious dude sat on a cloudy throne brushing His beard and throwing lightning bolts at poor unsuspecting sinners.

Nor is He a sugar daddy with ‘Mr. Universe’ tattooed on His forehead, eagerly granting wishes to all who press the right buttons and pronounce the right mantra.

He is a PERSON.

Someone you can know.

So amazing is the God of the Bible, knowing Him will take an eternity to fathom. A few short years on earth, and a few short hours each day, are just a spit in the ocean of awesomeness that we’ve been invited to enjoy.

I used to think Christians had it all wrong.

I used to think they were a restricted, bound-up, crowd of religionists who were missing the point.

I used to think the Bible was a big book of religious nonsense, with a few choice sound bites worthy of my smorgasbord spirituality.

Until I read it.

Actually reading the Bible, rather than making assumptions, makes a big difference. It certainly did for me.

A courageous Christian guy at my art college challenged me to read the New Testament. He told me, just read a little bit each day, and when you do, pray, say, or whatever you want to call it, “God, help me understand”.

I figured it made sense. What’s to lose right?

And the New Testament was the short bit, the small book.

I read a tiny bit each day. Could hardly believe that God would start His story with a long list of names. Seriously, what kind of dumb way is that to begin? I was yawning before I even got to chapter two.

But I persevered. Surely there was something behind the cover.

It took me a while, but I got no further than the Book of Mark, chapter one.

John, the wild man of the Jordon, says, “I have baptised you with water, but He (speaking of Jesus) will baptise you with the Holy Spirit.”

In He swept. No religious frills, no hymn book, no common prayer, no order of service, no pews or pontificating

No robes, or candles. No grinning ushers on the doors, no stand up, sit down.

No offering plate, or confirmation classes. No potluck dinner with sermon for dessert.

Nope. Right there in my bedroom.

Holy Spirit, as holy as can be, flooded my unbelieving, dark, doubting, heart and blew my ever-living mind.

I virtually crapped myself!

Not only that, He doesn’t stand on convention. He doesn’t follow the rules (at least not the ones people have concocted). He’s so outside the box I don’t even think the word box exists in His vocabulary.

Never having even heard or read about tongues or praying in the Spirit, in that moment my mouth filled my syllables I’d never encountered before, and I began to pray.

In foreign languages. In odd-sounding utterances that boggled my mind.

And I’ve been praying weird ever since.

Weirder and weirder in fact.

Yaba Shabba has grown into a whole world of wonder.

Prayer and relationship with the King has become my magnificent obsession.

I’m 30 years in and feel like I’m still only scratching the surface of how magnificent Jesus is.

If you don’t know Him, dude, you are missing out.

And if you do, wear your weird with joy.

Jesus first – everything else follows! 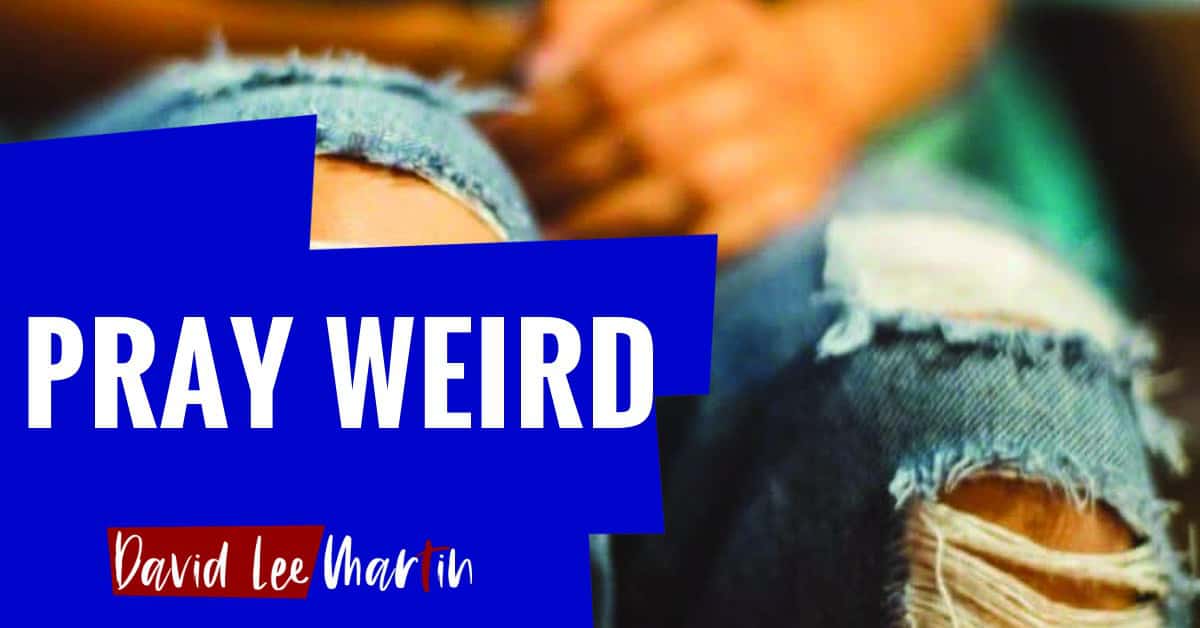