As men of faith we surely declare that we want to see the will of God in operation. We have prayed more than once, “Let Your will be done, let Your Kingdom come”.

Are you ready and willing to become the answer to your own prayer?

God’s will is clear, at least on one point:

“I will therefore that men pray every where, lifting up holy hands, without wrath and doubting.” (1 Timothy 2:8 KJV)

Papa’s will is that men should pray!

There has never been a time when such a call to spiritual arms has been more clear, and indeed more needed.

Like most men I struggle and often find my ferocious nature dissipated by the distractions and delusions of this present age. I am vaguely aware of the matrix I have allowed myself to be seduced by, but boy oh boy, how elusive the exit doorway seems to be in the unrelenting ebb and flow of everyday life.

And yet I also feel, in my frailty and failing, a growing urgency to send out a call to any manly heart who will hear – it is TIME TO PRAY LIKE NEVER BEFORE!

Manhood has an inherent nature that is ferocious. Savagely fierce and dangerous. Manhood pursues and subdues. It conquers and calls into being.

The devil and his minions want to shackle this Godlike power and do one of two things: tie it to purposes contrary to God and His Kingdom and let it run amok, devastating all that it touches, or conversely, castrate it so we find a church full of virtual eunuchs pretending to be ‘nice’ for a couple of short hours on a Sunday morning before reclaiming their manhood on Monday when they return to the office.

But the place the Almighty wants this aggressive winning nature to be truly harnessed is in the closet of prayer.

The devil fears nothing more than a man given to prayer.

When the men are praying the church is strong. When men fail in their duty the church languishes in powerless religion and man-centered philosophies and pursuits that meagerly scratch the surface of the world’s crying need.

Fervency is a burning hot passion that spills into action. No true fire can remain tamed under the grave clothes – it has by its very nature to burst forth and consume. This is the quality of prayer that reaches the nostrils of Heaven!

“The effective, fervent prayer of a righteous man avails much.” (James 5:16 NKJV)

I want to be effective, and in order for that to happen the prayers that rise from my heart must be propelled by a burning desire. Fire causes the incense of the heart to ignite and stream heavenward. Feeble, fireless prayers are really not prayer at all. They may sound noble, and be eloquently crafted for the ears of men to applaud, but they will never avail like the untamed cries of a heart aflame with God’s righteous cause.

“Then, like a wildfire, the Holy Spirit spread through their ranks…” (Acts 2:3 MSG)

Oh, how we need such a move of the Spirit in our ranks today! How desperate the parched earth yearning for the rain of heaven! How the swollen belly of God’s malnourished church rumbles for True Bread to satisfy its piteous cry for more.

Prayer is a Heart Cry

James 5:16 in the Amplified translation reads:

Prayer is the voice of the heart. The deep calling unto deep. Men are called not to fill the air with pathetic half-hearted utterances and excuse themselves. No! No! No! Men are called to lend all the might of their being to this one essential work – to labor in the closet of prayer until the very foundations of the world shake with God’s power and presence.

Is it any surprise that the world and the devil seek to keep men from this work?

Why is so much of the spiritual work relegated to the women of the House?

Don’t misunderstand me. I do not mean that in a derogatory way. A praying woman is equally as frightening as any man who has taken up his sword, but this is not written primarily to my sisters. It’s written to you, dear brother.

The heavy lifting of prayer takes every shoulder to bear it, but men have largely resigned their position as the bearers of the Ark and delighted themselves in carrying and building other things: reputations, businesses, wealth, education – all of these are replete with fervent men ploughing their blood and sweat into their establishment. But what of the closet? Where are the warriors of faith willing to close themselves away until the flesh is utterly consumed and the spirit-man steps forth in glorious battle array?

Too few will hear I know, but even one can make a difference. History shows that one man and His God are a majority.

This call is not an easy one, nor without cost. It demands a depth of consecration and death to self far more than most are willing to pay, but the Holy Ghost stands on the threshold ushering us across the line.

It begins with a willingness. Not a willfulness, for this savage territory we are entering is not won by the fire and fury of self. Instead, what is required is a yielding, putting aside “wrath and doubting”, following the lead of the Holy Ghost as He takes the man and molds him into a vessel of honor. A vessel through which He can lift up His best petitions.

Man of God, your search for significance has come to an end. Your seeking for purpose has found its prize. Prayer is your primary pursuit and glorious privilege.

Will you lean in and let Him lead you? 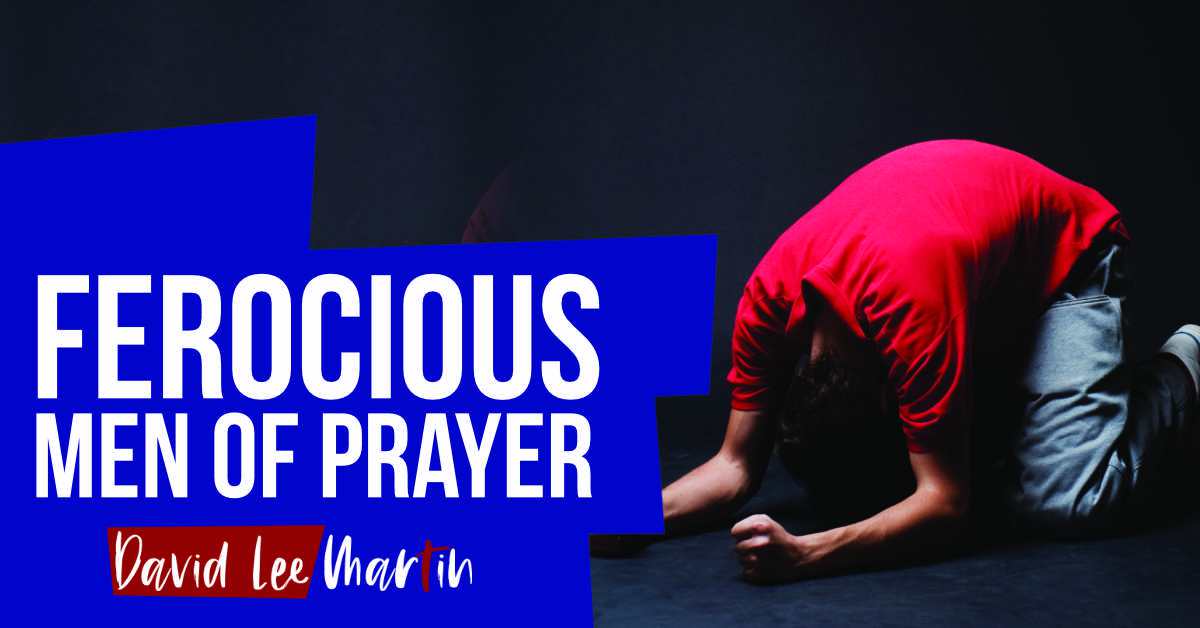